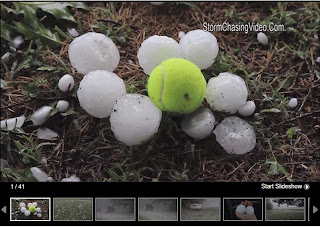 This is not the first time Wichita, KS has seen large hail coming down, the size of baseballs. It is also not the first time that NEXRAD has been influencing our weather patterns. On July 23, parts of Kansas got hit hard with large-sized hail. Residents described the hail event as happening very quickly, which started off as rain for five or-so minutes.

Although, we realize that hail can be a seldom-occurring natural weather event, it has become far more common after the 1960's, during the introduction of a weather modification patent for generating ice-nucleating crystals. Patent # 3,127,107 from 1964, entitled "Generation of Ice-Nucleating Crystals" states :

This invention pertains to the art of cloud seeding. It relates to a new process and a new device for generating crystals of ice-nucleating materials for introduction of the same into supercooled atmospheric clouds. The seeding of clouds, i.e. the introduction into super-cooled atmospheric clouds of materials which cause the formation of ice crystals in the clouds, has been practised for a number of years for the purpose of controlling or modifying weather conditions.

We realize that in many cases, this type of technology can be used for promoting rain, but does anybody stop to think what would happen if it was put into the wrong hands? Furthermore, how many times has this patent been tested in the sky, before generating the desired size for ice crystals. What are some possible consequences or outcomes when this experiment goes wrong?


Cloud-seeding has made more advancements up until today, by also using chemical agents which allow freezing water particles at higher temperatures. There are numerous patents, such as Patent # 3,545,677 entitled "Method of Cloud Seeding" (1970), which uses silver iodide (slightly toxic) in its methods. This patent goes into detail, describing what proportion of chemical agents should be used to form an ice nucleus of desired size. It states that, "The end result in all cases, however, is the precipitation of the silver iodide and the freezing of water to cause an ice nucleus." Patent # 3587966 from 1971, entitled Freezing Nucleation, tells us its invention "...relates to depositing ice and other hydrogen-bonding crystals from clouds and to freezing nucleants for causing deposition of ice from clouds. A process of the invention is to provide more effective freezing nucleants to cause ice to separate from clouds."

If there are individuals who are purposely (or by accident) mixing a certain amount of chemical agents causing large ice nuclei to grow, can you imagine the possibilities? Just imagine if this technology got into the wrong hands. We know that if we have the capability to suppress hail, we also have capability which can do the opposite. 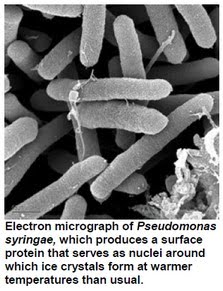 Bacteria are particularly good at ice-nucleation, causing it to occur at temperatures as high as -2 °C. The fact that bacteria like P.syringae being able to nucleate ice crystals has been known for decades. P.syringae bacteria are well-known "catalysts" for ice formation. This is well-documented, mentioned  in the Journal of Bacteriology and weather modification publications dating back to 1989, just to name a few :

One contribution to the growing understanding of bacteria’s role in precipitation was recently presented at the American Society of Microbiology meeting. Alexander Michaud studied hailstones that fell on his Montana State University campus, and as reported by the BBC: 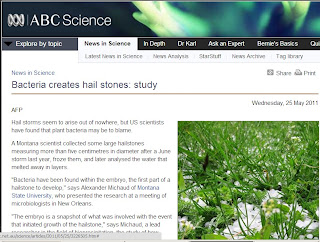 "He analysed the hailstones’ multi-layer structure, finding that while their outer layers had relatively few bacteria, the cores contained high concentrations. “You have a high concentration of ‘culturable’ bacteria in the centres, on the order of thousands per millilitre of meltwater,” he told the meeting."


"Hail storms seem to arise out of nowhere, but US scientists have found that plant bacteria may be to blame. A Montana scientist collected some large hailstones measuring more than five centimetres in diameter after a June storm last year, froze them, and later analysed the water that melted away in layers. "Bacteria have been found within the embryo, the first part of a hailstone to develop," says Alexander Michaud of Montana State University, who presented the research at a meeting of microbiologists in New Orleans."

When we think of "chemtrails", cloud-seeding, or aerosols used for Geoengineering, how many of us think of bacterial agents? The mainstream media relates hail formation to the P.syringae bacteria without mentioning a single word on weather modification or cloud-seeding that uses these biological agents for precipitation. The bacteria is also used for artificial snow-making in ski hill resorts. Although some may attribute our climate to naturally-occurring bacteria in the atmosphere, we must also take into consideration weather modification patents that are using these bacterial strains in massive cloud-seeding operations. One such patent is US # 5223412, entitled "Cell-free and whole cell ice-nucleators and process for their production" : 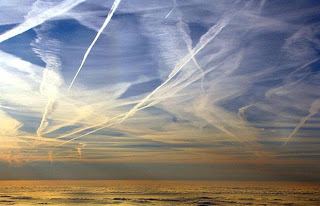 P.syringae, along with other strains, is also mentioned in the whole of the text. In another weather patent # 5,223,412, take note of the bold font:

We must also take into consideration the anthropogenic disease toll that these bacteria have on plants. An article from the University of Minnesota reports:


Many foliage plants are susceptible to bacterial diseases, especially during gloomy winter months. Common symptoms include leaf spots, blights, and wilting. Different species of bacteria affect plants in different ways. Plant symptoms include tip burns, leaf spots, blights, rots, wilts, or the total collapse of plant tissues. The most severe and devastating diseases of foliage plants are caused by bacteria belonging to the genera Erwinia, Xanthomonas and Pseudomonas.

You can read more about disease caused by Pseudomonas syringae here, or Erwinia here. To read more about bacterial plant disease, you can refer to the Cornell University Department of Plant Pathology ,

We must ask ourselves, how much bacteria is being spewed into the atmosphere artificially by humans? And what is its relation to hail and ice-nucleating crystals in the atmosphere? Is the weather modification (cloud-seeding) technology in the hands of righteous individuals? Could this be a case for anthropogenic undesired ice-nucleation (i.e. hail) and anthropogenic plant disease?

When our team heard about the large hail received in Wichita, we analysed the NEXRAD radar in this area immediately, which can be seen here. The radar, however, is from July 24th (one day after the hail storm). From both radar videos, we can clearly see the radar begins pulsing intensely, and an electromagnetic blast is emitted from the stations between 2:00 and 3:00 pm (CDT). We also see tapered storm systems being generated by these NEXRAD stations. Power outages were reported for 100,000 people in neighbouring Oklahoma, and also near Wichita, KS in Sedgwick county.

Above: From left to right. July 24. Order of radar events. Vance Air Force Base, OK (KVNX) NEXRAD Station. 10.21 UTC, 14.21 UTC, 18:09 UTC, 18:57 UTC. Note the tapered storm system formed in the first image (near the Doppler centre), then the sudden pulsing of this station, and the electromagnetic blast shown in the last frame. 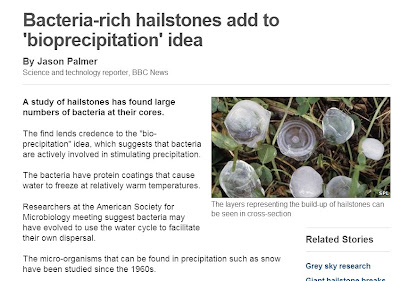 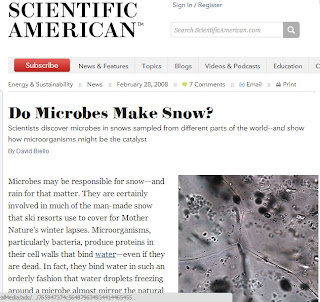