Update: We have recent video footage here, depicting the sky of Upper Michigan that was also closely linked to this storm system. The resident who witnessed this, Jason Asselin, describes it as:


``All of a sudden it got very yellow outside, it felt strange and mysterious. Then it slowly looked very orange, it was the craziest thing I have ever witnessed over my head.``

A storm system stretching from Nebraska, to Iowa and Wisconsin has been analysed, and it appears that this storm is being largely shaped by NEXRAD stations working in conjunction with each other. The cloud plumes appear to be originating from power plants along the Nebraska and Iowa border. Please see our playlist,  which clearly depicts the KOAX and KDMX NEXRAD stations involved in generating tapered linear storm systems. 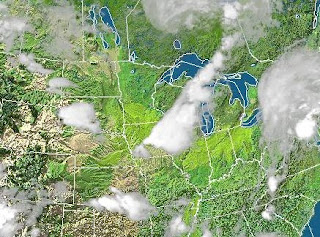 
More investigation is needed with these radar anomalies and their apparent influence on storm systems and moisture-driven forces. Provided below is a list of useful tools for capturing these type of events. It is important to become familiar with these software tools. We recommend adding them to your bookmarks: