Here is the weather satellite animation data for Western Canada, regarding the storms developing in southern Alberta. The playback is July 3 - 6.00 am to July 4 - 11.00 pm MST. Take note of where the strange tapering plumes (storms) are developing in S.Alberta. We are uncertain of where the source of this cloud formation is being fed from.

On July 4th, Calgary residents and others in southern Alberta were issued a tornado warning from Environment Canada. What was not mentioned to the public was the censoring of our weather data.


During this animation playback above, take note of the screen blackout which occurs on July 3 immediately after 20:30 UTC. We are astonished at the amount of data that was taken out of this loop. There is a large segment missing between July 3, 20:30 and July 4, 6:00 UTC. These frames have been removed from the satellite images. We believe this data has been intentionally censored out, prior to the developing severe storm in southern Alberta. Several Doppler stations in Western Canada also had their data removed during this time, prior to heavy electromagnetic pulsing coming from the NEXRAD / Doppler stations in the Prairies region. We also checked the data for Eastern Canada, and noted similarly this censoring to the public in selected areas. Furthermore, we also noted that July 4, 19:30 - 20:30 UTC (1:30 - 2:30 pm MST) has been censored out.

We have provided several Doppler animations for review of the developing storms in southern Alberta here. From the detailed video, we can see that the storm initially begins near Wetaskiwin, AB, in which we are uncertain of where exactly all this moisture is coming from. The Doppler station (centred at Strathmore, AB) becomes very active in what appears to be generation of plasma clouds shortly afterwards, driving the growing storm system south. This can be seen better by looking at the plasma clouds generated around the Doppler station that have become concentrated, pointing towards the storm system. During this time, the sky in parts of Calgary went from blue to a thin blanket of white. This can be further analysed in our weather time lapse video. In that video,  pay close attention to the artificial ionospheric plasma clouds produced by nearby Doppler stations that can generate electromagnetic waves in the same frequency range as HAARP. These EM-induced clouds can be seen driven by EM frequency (from Doppler station) from right to left in the video. Then shortly afterwards, we see the developing storm system is driven in from left to right, advancing in the opposite direction.

At this point, it becomes more clear to see the straight-edged cloud system that has formed, using EM frequencies emitted from the Doppler station. This is further manifested when one takes a close look at the thin and bent linear arm that is pulsed in the same direction. During this time, further strange anomalies can be seen near Lake Louis, which is pictured below:
Once the west arm of the storm system has reached the centre of the Doppler station, and after EM pulsation from the Doppler station has appeared to cease, the storm system stops going south and resumes its natural motion east. Meanwhile, there are other numerous storm systems developing south of Calgary, during the video playback.

Video footage of the storm making its way into northern Calgary (6:30 pm) can be seen here. Note how the southern end of the storm is well defined by its linear (radar-pulsed) edge. This also seems to be consistent with the radar at this time. The storm system appeared to be moving very fast, despite the apparent wind speed. Very low clouds were also spotted separately moving below this system.

We noted that the cloud system near the Rockies seems to appear quiet in the beginning of the video, however, as soon as the Doppler station becomes active in pulsing, one can see stretched cloud
systems being driven north east directly towards the Doppler station centre. Furthermore, note the strange cloud system forming near Hanna, AB here. It appears to hold very little moisture, and has no apparent source for its cloud development.

There may be more strange anomalies and other natural formations not discussed in the length of this entry. Please notify us if you come across anything interesting. 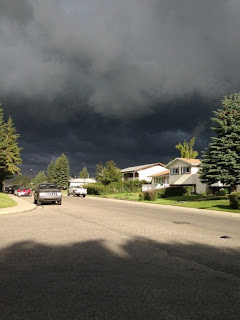