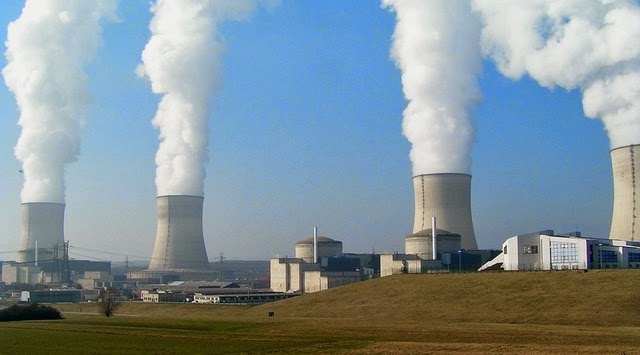 Firstly, we are surprised that none of the major media outlets have mentioned that the heavy rainfall southern Alberta received in the past two days originated from southern Montana, as seen in satellite imagery below. Prior to the escalated water levels in Alberta, similarly, Montana was also facing severe flooding. The Weather Network explains how the flood developed here, without mentioning a single word about Montana. The media merely tells part of the story, while it continues to be misinformed about the true nature of this storm, as reported by Globe & Mail:


Days of rain coupled with the spring run-off from the Rockies combined to bloat rivers in Alberta, and the flooding is expected to continue over the weekend. The South Saskatchewan River Valley is expected to peak late Sunday afternoon, Mr. Griffiths told reporters.

With the help of satellite images, we are lead to believe that this storm was generated using artificial precipitation methods, which are described in this video. We strongly recommend reading this post discussing weather patents that are being used to control storms and their relation to plume-shaped cloud systems. It is important to understand the weather modification patents that have lead up to this day. It is also crucial that we understand how aerosol emissions from power plants can affect cloud formations and precipitation generated in neighbouring areas, which has been found in recent studies. A great video which discusses this topic can be viewed here. This is not the first time that power plants have caused a freak storm of this nature.

This article will describe how the recent weather pattern formed, which brought majority of the recent flooding of rain into Alberta, accompanied by videos of weather data and NEXRAD animation. A playlist of all events can be viewed here. Part II discusses mainly Calgary and surrounding areas in southern Alberta, strictly using the Pacific and Prairie radar stations' data. Part II can be read here. 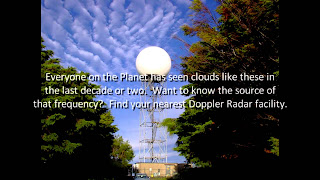 Regarding the satellite video below, pay close attention to the storm originating in southern Montana which moves north west into southern Alberta. At about 11 seconds in, we see a tapering arm stretching south to the Wyoming-Idaho border, which later feeds the southern end of the storm for some time. This storm system moves east to join other storms that originate in North and South Dakota. Also, pay attention around these areas of North and South Dakota, to see how storm systems suddenly emerge from central points.

It is important to note how some of these storm systems are tapered , originating from a central point. Some of these central points are shown to be near NEXRAD (Doppler) sites and power plants. NEXRAD towers are capable of emitting electromagnetic waves at different frequencies that can affect weather patterns or particles in the atmosphere. With microwave transmitter capabilities, able of emitting over 700,000 watts in each pulse, these Doppler devices can generate an enormous amount of corona ions (charged particles) which bind to water molecules. The generation of CCN (cloud condensation nuclei) using frequency or electric charge is the corona-effect for ion generation of rain, which can be read about here. More importantly, there are power plants located in Billings and Colstrip, MT, which are capable of producing massive amounts of CCN, which can form into rain clouds and disrupt precipitation patterns. It is important to be aware of these types of artificial anthropogenic precipitation methods, as we believe this may be related to how the cloud system in Montana started.


What is interesting about where some of these storm systems are developing is that they are in close proximity to NEXRAD stations and / or power plants. Below is a snapshot of where the south Montana storm originates, which is near the KBLX NEXRAD station and J.E. Corette Power Plant near Billings, MT:

The storm system that appears in southern Montana also happens to be near the J.E. Corette Energy Plant. Located along the Yellowstone River on the outskirts of Billings, MT, the J.E. Corette plant is a coal-fired unit owned by PPL Montana, and it has a generating capacity of 153 megawatts. Roughly a hundred miles east is another power plant in Colstrip, MT, capable of producing over 2,000 MW of energy. Recently, in March of 2013, a lawsuit was filed against the Colstrip power plant, over pollution controls. There are numerous studies suggesting a strong correlation between air pollution and its impact on climate. The amount of CCN (cloud condensation nuclei) these types of power plants can produce is astounding, resulting in abundant clouds being generated and possibly heavy precipitation in downwind areas. An important study conducted on the impact of fossil fuel burning from power plants on our climate can be read here. The study suggests that:

The consequences of this technology for aerosol emissions, and in particular the regional scale impact on cloud micro-physics, have not been studied until now. We performed airborne investigations to measure aerosol size distributions in the air masses downwind of coal-fired power installations. We show how the current generation of clean technology reduces the emission of sulphur and fine particulate matter, but leads to an unanticipated increase in the direct emission of ultra-fine particles (1–10 nm median diameter) which are highly effective precursors of cloud condensation nuclei (CCN). Our analysis shows how these additional ultra-fine particles probably modify cloud micro-physics, as well as precipitation intensity and distribution on a regional scale downwind of emission sources. Effectively, the number of small water droplets might be increased, thus reducing the water available for large droplets and rain formation. The possible corresponding changes in the precipitation budget with a shift from more frequent steady rain to occasionally more vigorous rain events, or even a significant regional reduction of annual precipitation, introduce an unanticipated risk for regional climate and agricultural production, especially in semi-arid climate zones.


Regarding this clean technology, which creates finer particles in power plant emissions, and the fact that the Alberta flood occurred on June 2013, it is quite ironic, especially considering the Colstrip power plant's proposed plans for 2013, which state:


To increase particulate control to meet the MATS Rule, a wet electrostatic precipitator (Wet ESP) is added in series with each scrubber (pg. J-16) . . . Proposed changes to Section 316(b) issued under the Act will apply to power plants as well as other industrial facilities. They require facilities to utilize “best technology available.” The EPA expects to finalize power plant standards by June 2013 (pg. J-12).

As an example of illustrating anthropogenic clouds generated by means of aerosol emissions (CCN) in Calgary, Alberta, the ENMAX Calgary Energy Centre is a great example. Found on the north east corner edge of Stoney Trail, relying on fossil fuels and the burning natural gas (methane), this power plant is capable of forming enormous amounts of clouds in our sky. Acquired by ENMAX Energy through a subsidiary in 2008, this facility is a 320 megawatt natural gas-fuelled plant. A list of all plants can be found here.


At about 6 seconds into the video, you will notice that the storm system is generated in southern Montana, but more importantly, aerosol plumes from near active power plants can be seen feeding this storm. Some of this phenomenon can be viewed from NEXRAD KBLX radar in Billings, MT. The storm is further driven north by either wind patterns or active NEXRAD / Doppler electromagnetism, possibly using stations in southern Alberta. Later throughout the video, this storm passes east through other NEXRAD-active regions in neighbouring states. Overall, we can see this storm suddenly originating from specific points of interest, initially starting near Billings, Montana, being fed by active power plants, such as the one found in Colstrip, MT. This is what brought majority of the rainfall in the past day, which caused severe flooding for Southern Alberta. 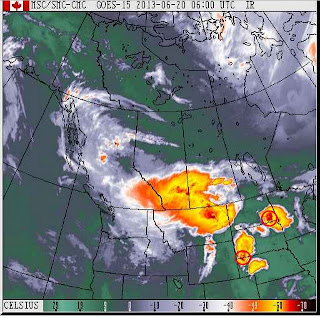 At about 10 seconds into the video, we see numerous other storms suddenly appearing at central points, specifically in North Dakota. These storms later merge with the one that was generated in south Montana. We have uploaded the various NEXRAD animations for these different stations to better depict what was occurring in those areas. You will see the storm systems being fed from specific areas as shown on radar, with possible electromagnetic activity being emitted from these radar stations, which can influence nearby cloud patterns and atmospheric particles. Tracking aerosol plume emissions from power plants using radar is difficult in some cases, due to the dynamics of cloud micro-physics and formations, but it can be seen in some cases. 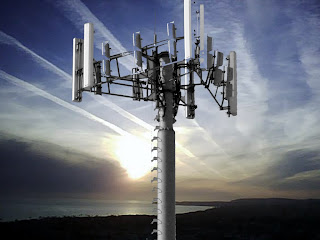 With the amount of metallic and non-metallic particles in aerosols that are being sprayed (Geoengineering) in the upper atmosphere daily, which actively collect moisture to form / dissipate clouds, there should be no surprise at how some of these weather patterns are being driven. It is worth noting what Dane Wigington and other experts have to say on this topic. When clouds become laced with metallic particles, these clouds can then be influenced by electromagnetic waves emitted through NEXRAD radar or weather modification satellites. The air acts as a fluid, in which these particles are distributed. This is creating an ongoing problem in many areas and is spoken about here.

After watching the NEXRAD animations, one should be convinced that this is not how natural cloud systems are formed. We can clearly see the weather patterns and cloud formations being affected by electromagnetic waves (ie. radar) emitted from these NEXRAD stations. We have also seen many of the cloud formations to be fed from nearby power plants.

More research is needed in this field, and there needs to be a thorough investigation from officials around various States and Canadian cities for the amount of damage that has been caused in the name of weather modification and anthropogenic climate impacts. Let us not forget what happened during the Vietnam War in the 1960s, and the extent to which weather modification technology has advanced since then. There are also those who will purchase weather at the expense of others.

For possible motives regarding this flood, we have a post dedicated to this discussion. Part II can be read here, which takes a closer look at the radar stations near southern Alberta (and Calgary). 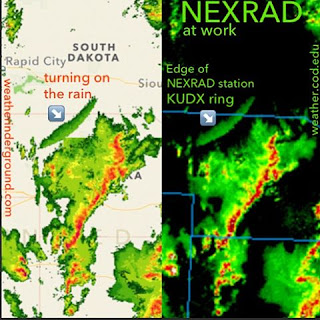 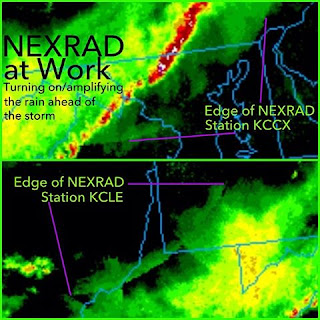 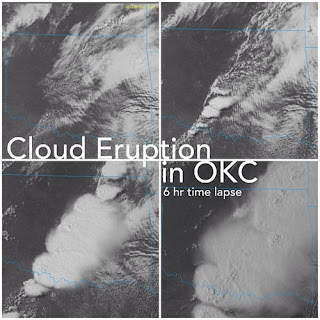 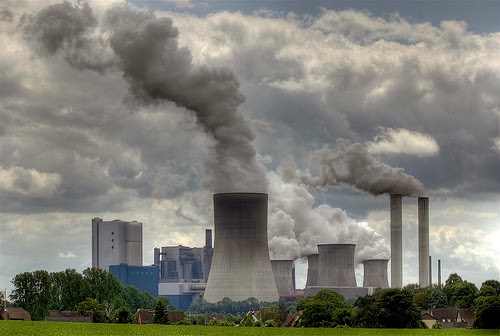 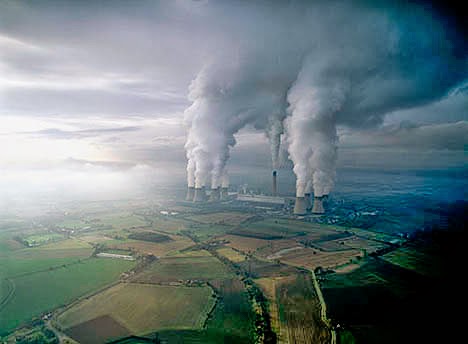