Are Doppler and Transmitter / Receiver Devices Altering our Weather?

Our team of SkyWatchers have discovered a new set of large transmitter / receiver stations resembling NEXRAD / Doppler stations in Southern Alberta, just west of High River (see pictures below). They have been identified as belonging to Globalstar :


The devices have been described as Gateways, which can be found on this map: 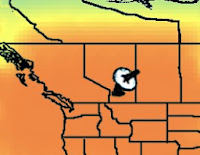 Each gateway, which is owned and managed by the service provider for the country in which the gateway is located, receives transmissions from orbiting satellites, processes calls, and switches them to the appropriate ground network.

A gateway may service more than one country. Gateways consist of three or four dish antennas, a switching station and remote operating controls. Because all of the switches and complex hardware are located on the ground, it is easier for Globalstar to maintain and upgrade its system than it is for systems that handle switching in orbit.


In another Globalstar document, the Director General is reported as stating:


We have participated in the RABC’s preparation of its response to the Gazette Notice, and agree in general with most of its comments. We do, however, wish to retain use of the band 6875 - 7055 MHz at the two current sites Smiths Falls and High River for the space-to-Earth feeder-link portion of our network.


These Globalstar devices that were discovered appeared to be in the middle of nowhere, however, there is also a Doppler transmitter / receiver station (ATC radar) in north-east Calgary, which interestingly aligns along the same longitudinal direction (113°58'21.15" W). Please see in the map below:


There is a weather radar (Doppler) station near Strathmore listed here, in which the radar data can be viewed. These "weather" radars and transmitter / receiver stations (Globalstar) are capable of emitting enormous amounts of electromagnetic waves at different frequency ranges. How this EM radiation energy affects our atmosphere and weather patterns is often over-looked. For example, Doppler radar for weather monitoring can emit over 700,000 watts into the sky with each pulse. These waves can actively influence (shape) metallic aerosols and affect our weather patterns. The video below shows how frequencies emitted from such Doppler / NEXRAD and other antennas can affect the atmosphere. It is also worth noting what a rain fade is, keeping in mind that, if rain affects microwave frequency, how does microwave frequency affect rain:


Rain fade refers primarily to the absorption of a microwave radio frequency (RF) signal by atmospheric rain, snow or ice, and losses which are especially prevalent at frequencies above 11 GHz. It also refers to the degradation of a signal caused by the electromagnetic interference of the leading edge of a storm front. Rain fade can be caused by precipitation at the uplink or downlink location. However, it does not need to be raining at a location for it to be affected by rain fade, as the signal may pass through precipitation many miles away, especially if the satellite dish has a low look angle. From 5 to 20 percent of rain fade or satellite signal attenuation may also be caused by rain, snow or ice on the uplink or downlink antenna reflector, radome or feed horn. Rain fade is not limited to satellite uplinks or downlinks, it also can affect terrestrial point to point microwave links (those on the earths surface). 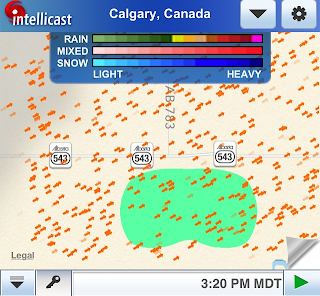 In these photos taken from Intellicast radar, we can see a region of rain / moisture hovering over a large area where the Globalstar devices are located 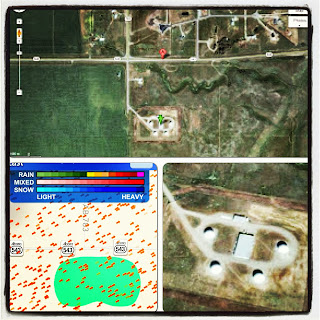 The frequency used from HAARP matches the capability of NEXRAD (Doppler) radar, as in the creation of plasma in the atmosphere using 0 - 4 MHz. NEXRAD pulses between 0 - 12.4 MHz, placing the HAARP frequency and radar frequency on overlapping spectrum. It has been found that radar (EM waves) is used to generate plasma from a place called SPEAR (in Norway) , and they are using radar as a 'heater' in the same spectrum that NEXRAD radar normally operates on when not in pulse mode (2.7GHz - 3.0GHz). This proves that NEXRAD radar (Doppler stations) is capable of, and is currently being used to induce effects in the atmosphere -- not just observe it. Radar was also used to generate artificial plasma at the MIT research labs, using C-band and S-band, essentially the same bands that NEXRAD radar use. In other words, NEXRAD radar or Doppler stations have the functionality to act as small versions of HAARP or EISCAT, and to function as 'heaters' and plasma / lightning generators / weather modification devices.


In another interesting video below, speaking on the topic of controlling weather, one user shows how the Tinker Air force Base used NEXRAD radar to stop the Oklahoma tornado storm from coming anywhere near the base. This can be seen at 7:20 minutes into the video.

This video below also speaks more about the NEXRAD stations, at about 8:40 minutes into the video:


If southern Alberta wants its natural weather back, these NEXRAD Doppler stations and other transmitter / receiver stations that emit large amounts of energy at varying frequencies into the atmosphere need to be removed.

Electromagnetism & Weather Modification Patents - The Link to NEXRAD
Posted by Weather Peace at 13:43