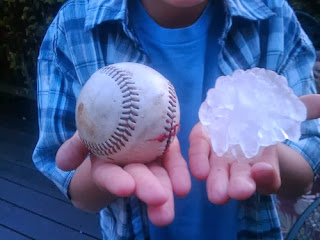 How do ice-nucleating agents sprayed into the atmosphere affect hail formation? Can NEXRAD radar generate plasma-induced ice formation in clouds, resulting in ice multiplication? All of this will be discussed in what follows, which is a deeper look into the unusually-large size of hailstones that are reported more and more recently.

The information provided from experimental results taken from Weather Patent # 3587966 (June 28, 1971), entitled Freezing Nucleation, is worth considering, especially when discussing ice formation in clouds. Forty years later, could the deliberate use or calibration of newer technology regarding ice-nucleating agents be causing larger hail stones to form and drop instantly, in a way to prevent smaller hail from damaging a wider area of commercial interest? Let us also keep in mind how changing atmospheric conditions (temperature, humidity, etc) can react with ice-nucleating agents causing unprecedented hail formation. We encourage the reader to draw their own conclusions on the relationship between hail storms and ice-nucleating agents. Weather Patent # 3587966 (June 28, 1971), entitled Freezing Nucleation, states:

The present invention relates to depositing ice and other hydrogen-bonding crystals from clouds and to freezing nucleants for causing deposition of ice from clouds.

A process of the invention is to provide more effective freezing nucleants to cause ice to separate from clouds. 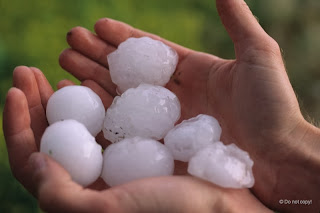 These products having between 1 and 50 percent sodium chloride ion impregnated according to example I (washed and unwashed), gave massive ice at temperatures of about minus 10° C in an isothermal cloud chamber.

Other results are graded by the skilled‘operator on a judgement basis from 1 to 10, reserving the value of 10 for the best nucleant ever tested, ammoniated silver iodide, recognizing that a superior nucleant will form in a shorter time larger numbers of ice crystals in the viewing volume and also will form ice at a higher onset temperature than a poor nucleant.

The product of example 1, with a concentration of 20 percent sodium chloride (unwashed) formed massive ice at minus 8“ to minus 10° C and was given a rating of 6, this being one of the best material obtained by the techniques above set forth.

It is also worth mentioning a study that has been conducted, regarding laser-induced plasma cloud interaction and ice multiplication under cirrus cloud conditions: 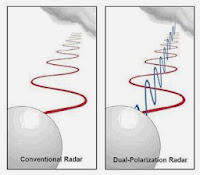 Potential impacts of lightning-induced plasma on cloud ice formation and precipitation have been a subject of debate for decades. Here, we report on the interaction of laser-generated plasma channels with water and ice clouds observed in a large cloud simulation chamber. Under the conditions of a typical storm cloud, in which ice and supercooled water coexist, no direct influence of the plasma channels on ice formation or precipitation processes could be detected. Under conditions typical for thin cirrus ice clouds, however, the plasma channels induced a surprisingly strong effect of ice multiplication. Within a few minutes, the laser action led to a strong enhancement of the total ice particle number density in the chamber by up to a factor of 100, even though only a 10(-9) fraction of the chamber volume was exposed to the plasma channels. The newly formed ice particles quickly reduced the water vapor pressure to ice saturation, thereby increasing the cloud optical thickness by up to three orders of magnitude. A model relying on the complete vaporization of ice particles in the laser filament and the condensation of the resulting water vapor on plasma ions reproduces our experimental findings. This surprising effect might open new perspectives for remote sensing of water vapor and ice in the upper troposphere. 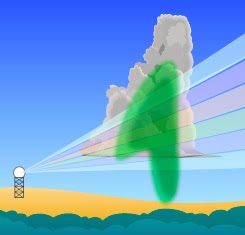 In another article from The Telegraph, we are told that, "Scientists are attempting to control the weather by using lasers to create clouds, induce rain and even trigger lightning. . . Their experiments have shown that intense pulses of light can cause ice to form and water to condense, leading to the formation of clouds." The question we must now ask ourselves is how do NEXRAD / Doppler radar (electromagnetic) emissions fit into all of this? The frequency used from HAARP matches the capability of NEXRAD (Doppler) radar, as in the creation of plasma in the atmosphere using 0 - 4 MHz. NEXRAD pulses between 0 - 12.4 MHz, placing the HAARP frequency and radar frequency on an overlapping spectrum. It has been found that radar is used to generate plasma from a place called SPEAR (in Norway) , and they are using radar as a 'heater' in the same spectrum that NEXRAD radar normally operates on, when not in pulse mode (2.7GHz - 3.0GHz). This proves that NEXRAD radar (Doppler stations) is capable of, and is currently being used to induce effects in the atmosphere -- not just observe it. Radar was also used to generate artificial plasma at the MIT research labs, using C-band and S-band, essentially the same bands that NEXRAD radar use. In other words, NEXRAD radar or Doppler stations have the functionality to act as small versions of HAARP or EISCAT, and to function as 'heaters' and plasma / lightning generators / weather modification devices. Watch this video by DutchSinse to learn more.

Keeping in mind the abilities of radar to generate plasma, we are brought back to the study (above) indicating that, "the plasma channels induced a surprisingly strong effect of ice multiplication. Within a few minutes, the laser action led to a strong enhancement of the total ice particle number density in the chamber by up to a factor of 100". Could this be a plausible explanation for the unusually large size of hail stones that have been reported more often, recently? Got hail? 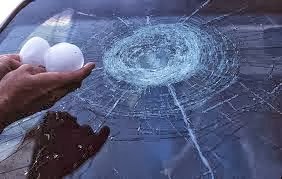 Silver Iodide: The Case Against Cloud-Seeding