The Case Against Cloud-Seeding 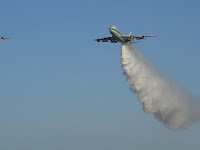 Before reading this post, it is important that one understands the concept and methods used for ice-nucleation, which can be read here. As we know, Silver iodide is used to induce rain, either sprayed into the sky by aircraft or from ground. The toxic acute health effects of Silver iodide have been noted, however much research is lacking regarding chronic health effects and many others. The Material Data Safety Sheet for Silver iodide can be read here. We provide an excerpt from this article:


According to Medscape.com, prolonged exposure can cause discoloration of the hands. While the yellow white film-processing chemical would sometimes leave the skin a little yellow or orange, the lasting result was often a grey ashy color staining their hands. This discoloration is a side-effect of the disorder, agyria.

Argyria is classified as a skin condition though it also can potentially affect mucous membranes. Basically, the silver particles impregnate the skin and leaving residue in mucous membranes. Studies conclude that an unknown amount of silver can cause this condition because the rate at which it affects individuals varies so much. But this is, again, testing contact with the skin, not on the inhalation of silver iodide.

Putting aside human health, there are many controversies still surrounding the idea of cloud-seeding, as it is not based entirely on sound science, as discussed in this article: 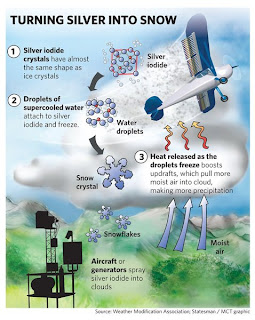 There are many, many unscrupulous people in the field of weather modification who up until now have promoted some methods without any proper scientific evidence. Developing countries are particularly at risk here," says Siems. The technique ''remains controversial, especially because in the early days unrealistic claims were made about its success'', says Johannes Verlinde, associate professor of meteorology at US-based Pennsylvania State University. Another reason for the controversy, he says, is that no two clouds are alike, making it difficult to compare clouds to prove it really works.


Colorado State University climate researcher Bill Cotton conducted one cloud-seeding study five years ago. A $100,000 grant to study weather modification in Colorado produced no definitive results. He said there is a “good chance” cloud seeding boosts snowfall, adding that to have so much spending on it without conclusive research is “kind of sad.” “It’s not a very effective way to do science,” he said.

Silver iodide is also used for hail mitigation methods. We believe the media isn't telling us the real science behind Silver iodide "hail suppression" and weather patents. Knowing that Silver iodide cloud-seeding is used for inducing ice-nucleation into the sky, we believe instead of getting small hail pellets in a larger general area of the city, we instead get bigger hail pellets to come down instantaneously (with heavy shorter-duration rain). This would mean affecting a smaller area, but with more severity. We present snippets from an article which share these views, the Mountain View Gazette (June 28, 2011), written by Sylvia Cole, with emphasis added in square brackets:


There have already been 80 hours of work logged by pilots of Weather Modification Inc., based out of the Old-Didsbury Airport, this month alone. 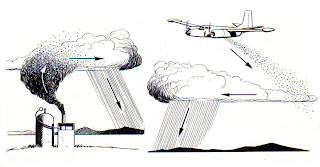 [This leaves us wondering if there were individuals cloud-seeding prior to the June flood in Alberta (2013), perhaps trying a little too hard to prevent hail?]

The company, sponsored by Alberta Severe Weather Management Society (ASWMS), a group of insurance companies that privately funds cloud-seeding in the area, spent 11 of the first 21 days of June shooting silver iodide in the clouds as a way to shrink ice stones and reduce property damage, said Terry Krauss, PhD in meteorology and program director for the ASWMS.

[Let's hear it from the eye-witnesses]

“We can see from our house when they fly over and we can see their tanks. I saw them two times (last) year and that was the two times we saw hail,” said Wendy Schroeder, who
lives west of Sundre and noticed it for the first time last season. She said the first time she saw the planes go by was July 8 and “within 35 minutes we were pounded. It was an immediate drop of the hail,” she said.

Schroeder said the hail pounded down for seven minutes with big gusts of wind that flooded into her house where the windows weren’t sealed. “In seven minutes we had two inches (of rain) and there was no grass.” She said a couple of days later the same thing happened. “The timing of this is highly suspicious and can’t be ignored.”

Schroeder said she’s only seen the seeding planes once this year and while there wasn’t any hail that followed, she noticed a yellow film left on grass and on her vehicles that she said happens every time a plane goes by and rain or hail follows. She believes the iodide is toxic and bad for livestock, plants and humans. [She is definitely not alone in this belief]

"Alberta Agriculture funded a five-year study from 1974 to 1978 called the Alberta Hail Project. The project, similar to the one funded today by ASWMA, seeded all potential hail clouds for five years. The project was continued until 1985 when it was stopped because of “inconclusive scientific data,” said Cam Hantiuk, media relations for the premier’s office."

The lack of provincial regulation worries Louis Bauman, south of Sundre, who’s been following cloud seeding since the government’s involvement in the 1970s.

His brother Joseph, who has since passed away, fought with the government back in the late ’70s and early ’80s to stop the project. He said it wasn’t right that the government was meddling with the natural course of weather and said such activities were devastating for agriculture, livestock farming and recreation.

“Is it lawful in Alberta to change the natural course of the weather by physical and chemical intervention to produce artificially positive rain and hail storm in one part in order to prevent contingent rain and hail in another?” he wrote in an affidavit to the Red Deer Provincial Court in 1984."

“Something isn’t quite right; something is going on,” Hofer told the Gazette last year. He’s lived in the Sundre area for the last 50 years and said he was hired to work in Penhold during the ’70s when the Alberta Hail Project was in full force.

Hofer said he was responsible for picking up hailstones to see if there had been any change in the size from the silver iodine. “We quit with it because it didn’t accomplish nothing. You can’t control nature. Cloud-seeding is just some fancy name for creating an electrical storm,” he said. He believes that the seeding only suppresses a storm until eventually it needs to be released. He used the example of a hailstorm on Aug. 2, 2009 that devastated the area. “It builds up and it builds up … until it breaks loose and gets worse.”

The cloud-seeding project with a $2 million annual budget is funded by more than 20 of Alberta’s top insurance firms that represent 90 per cent of all insured companies, said Krauss.

“Maybe the seeding will help Olds and Calgary by pre-emptying the clouds onto us, but what sort of reasoning is that, and how fair could that be?” asked Schroeder in a letter to the editor last year.


In an article by Ronald B. Standler, under a sub-section titled, Langmuir's cloud seeding in New Mexico, we are told:

The General Electric / U.S. Military research project released AgI and dry ice in the vicinity of Albuquerque, NM during October 1948 and July 1949. Langmuir initially claimed that this release caused rain all over the state of New Mexico and possibly in Kansas.

Langmuir's group continued to release AgI in New Mexico between November 1949 and July 1951. Langmuir claimed that the release of AgI modified the weather, not only in the state of New Mexico, but also more than 1000 kilometers downwind.

The release of AgI "was discontinued in July, 1951 during the great floods in Kansas and adjacent states." (Byers, 1974, p. 20) This flood was no ordinary flood: the 13 July 1951 flood at Kansas City was described as "the most devastating flood in the nation's history"; 17 people died as a direct result of that flood, despite weather forecasts and warnings. (Alexander, 1951) It is still unknown what effect, if any, the AgI release in New Mexico had on rain and floods in Kansas. As discussed below, perhaps the more interesting lesson is not one of science, but ethics: Langmuir sincerely believed that AgI release was modifying weather at long distances from the point of release, yet he continued to engage in such weather modification for two years, despite the possibility of harm from such modification, and despite the lack of consent by affected people.

History and Problems in Weather Modification